The Maryland Business Climate Survey focuses on firms in the “export base” of the state’s economy that sell or compete for the sale of their products/services regionally, nationally, or internationally. These firms are concentrated in the manufacturing, wholesale/distribution, finance, and business/professional services sectors of the economy, in contrast to the construction, utilities, retail, health-care, and personal services companies that primarily serve the local population. Because they serve regional, national, or international markets, these export base companies are the most impacted by Maryland’s business climate.

The firms participating in the 2019 survey are primarily locally owned, with 90% of firms surveyed being headquartered in Maryland. Of the 103 out-of-state based firms participating in the survey, 95 identified the location of their headquarters, with 8 firms being international and 87 having headquarters in other states, primarily neighboring Virginia (10), Pennsylvania (9), and Delaware (4), but also Illinois (7), California (5), and Texas (5).

Table 28a: Is your company owned in Maryland or are you part of an out-of-state or international organization?  (Q2) 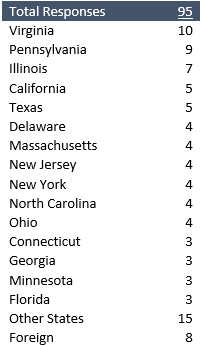 In terms of industry of operation 42% of firms surveyed were in the professional services sector, followed by the wholesale sector at 18% and manufacturing at 17%. Eighty-four percent of firms were single-location operations, with most firms (three-quarters) had multiple locations operating less than five additional locations in Maryland.

In terms of the markets served by the companies participating in the Maryland Business Climate Survey, 63% of businesses surveyed relied on Maryland for more than half of sales and about a quarter of firms sold more than three-quarters of their goods and services outside of the state. Firms in the Washington suburbs reported the highest share of firms deriving more than half of their revenues from out of state. In terms of federal and export markets served:

Table 30: Is the place where you work the only business location your company has in Maryland?  (Q4)

Table 31: What percentage of your revenues would you estimate comes from inside of Maryland? (Q6)

Table 32: Do you directly sell goods or services to the federal government
(i.e., are you a federal contractor)?  (Q7)

Table 33: Does your company export goods or services out of the United States? (Q9)